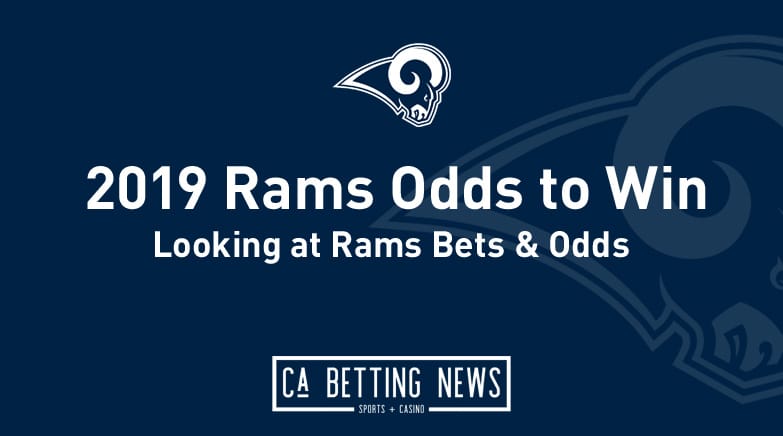 The Los Angeles Rams had an excellent 2018 season that saw them make it all the way to the Super Bowl before losing 13-3 to the New England Patriots. The Rams finished the regular season 13-3 and earned the number two seed in the NFC. It was the second consecutive year that the Rams came out of the NFC West as the division winner. After being so close to winning a Super Bowl last year before ultimately falling short, the Rams will be looking to make a return trip to the Super Bowl in the 2019 season. This time, however, they will be looking to win. At California Betting News, we’re covering all the California teams and their odds to win. Let’s dive into the Rams Odds at FanDuel Sportsbook.

The Los Angeles Rams signed free agent Eric Weddle on March 8th. Weddle grew up in the Los Angeles area and is now playing near his hometown for the next two season. Weddle has been one of the league’s best safeties over the last eight years, making six Pro Bowls. He was a two-time first-team All-Pro and led the league in interceptions in 2011. Since 2008, Weddle has started all 16 games in all but two seasons (he started 13 in each of those two seasons). Weddle will be a great addition to a Rams secondary that was in the middle-of-the-pack in terms of passing yards allowed per game (14th).

The Rams signed free agent Blake Bortles on March 19th. Bortles signed a one-year deal with Rams to be the backup to Jared Goff. Bortles has had some rough years as a starter in Jacksonville. He isn’t going to come in and steal the job away from Goff. He is, however, going to be a nice fill-in for Goff in late-game blow-out situations and late-season games (assuming the Rams have a week or two where they can rest their starters). Should anything happen to Goff this season injury-wise, Bortles is an experienced guy who can come in and let running back Todd Gurley run the show. As long as he doesn’t need to be the focal point of the offense, Bortles can help run an offense successfully and should be considered a top back-up.

On March 21st, the Rams signed free agent linebacker Clay Matthews. Matthews is a former Green Bay Packer who is also from the Los Angeles area. Matthews has 83.5 sacks, 14 forced fumbles, and six interceptions in his 10-year career. He will be a great addition to a Rams defense that will most likely use him for blitz packages. Matthews has lost a step or two over the years, but in a limited number of snaps per game, he certainly has the talent to rush the quarterback effectively.

Stats are from 2018 regular season.

The Rams will certainly be another contender this season. They have one of the league’s best running backs in Todd Gurley and Jared Goff is only going to keep getting better. The receiving corps of Robert Woods, Brandin Cooks, and Cooper Kupp is one of the best in the league. The Rams defense wasn’t its best last season, but any defense that features Aaron Donald is going to cause problems for the opposing offense. The additions of Clay Matthews and Eric Weddle will certainly help propel this defense back to its full potential. With how good this offense is, an improved defense in 2019 makes them a team that nobody wants to see, especially come playoff time.

Are the Los Angeles Rams A Good Bet?

-195 to win the NFC West is the second-best odds of any team to win their division in 2019 (New England-550). The Arizona Cardinals will be experimenting all year with their personal and can’t be considered a real threat. The Seattle Seahawks haven’t looked as sharp as they have in the past and seem to be on the decline. The biggest threat right now for the Rams is the San Francisco 49ers. The 49ers had some bad injury luck last year and look ready to rebound big this season. While I think the 49ers will finish second in the NFC West (possibly a Wild Card), I don’t think they are at the level of the Rams just yet. -195 is certainly worth the odds.

+450 to win the NFC is second only to the New Orleans Saints (+400). Drew Brees is kind of like the Tom Brady of the NFC, you can never count his team out. +450 provides a decent payout. Realistically, I can only see about five teams competing for the NFC this season. Those teams are New Orleans, Los Angeles, Philadelphia, Chicago, and Green Bay (ironically FanDuels five favorites to win the NFC). If you’re going to bet on any team, might as well be the team with the best defensive player (Donald) and running back (Gurley) in the league.

+1000 to win the Super Bowl is certainly worth a stab. Throwing $100 on the Rams to win the Super Bowl will net you $1,000. That’s not a bad payday for a futures bet that has an absolute realistic chance of winning. As the season progresses and the Rams pile up the wins, the odds aren’t going to be as favorable. So if you are going to bet on the Rams at all this year, now may be the best time to do so.