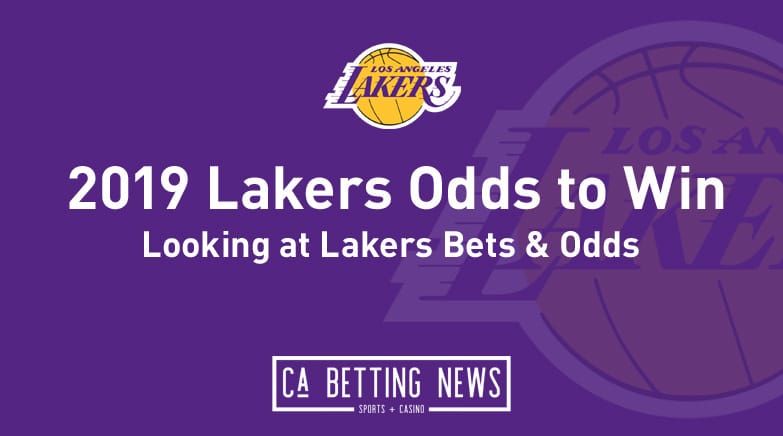 Los Angeles has had a busy summer with earthquakes and offseason NBA storylines. Kawhi Leonard stole the show signing with the Clippers over the Lakers, but he also brought over Paul George. But, we are are here to talk about the Lakers odds of winning the NBA title. The Clippers moves certainly play a part in that. After the Anthony Davis trade, the Lakers were favorites to win it all. That has now changed. Los Angeles filled out the rest of their roster in free agency, but not with the names they hoped. It is time to take a look at their potential for making it through a loaded western conference and edging out an eastern conference team for their 17th title.

What To Make Of The Surrounding Cast?

Everybody was expecting the Lakers to land another max-contract superstar. Leonard’s free agent decision lingered past most others, and other plan b options had already signed elsewhere. This left Los Angeles limited with options, and this also had them bringing back pieces that didn’t fit before. The DeMarcus Cousins signing was interesting, and also cheap. Anthony Davis was not set on playing center, and this pushes him back to the four, at least for now. The front court of James, Davis, Cousins is going to be an interesting one for spacing. Cousins has shown some flashes of solid play, but has not resembled the player he was before the injury. Danny Green was signed, which gives the Lakers what they need, a strong shooter who can space the floor. They might lean into the same problems as last season, which was just not having enough shooting. Quinn Cook and Avery Bradley could fill those roles, but that is not a given. While there are a few new faces, and obviously adding Davis helps, but the Lakers are not as balanced as some of the other teams in the conference.

Why Are The Lakers 5th Best Odds To Win The #1 Seed?

You might be wondering why the Lakers are second best favorites to win the NBA title, but are the fifth best odds to win the one seed on the west. There are a few things that could factor into this. There were a lot of moving pieces for the Lakers this offseason, but also other teams. Los Angeles is a team that will need to gel, and they could go through some tough stretches throughout the season. We know the playoff switch is there for James, and the Lakers could end up being a 3-4 seed that is a dangerous matchup for anyone. The Clippers, Nuggets, Jazz, and Rockets are the four teams ahead of them, and they are the ones that rival the Lakers the most in the conference. Los Angeles has the fifth highest win total in the west, indicating that the Lakers will just be in the mix of a muddy western conference, but have the advantage once playoffs come rolling around.

Can LeBron Muscle His Way To A 4th Championship?

He certainly can. There is no doubting that James can take this group that now includes Anthony Davis to a title. This will be by far his toughest playoff stretch given the strength of the conference. With no cupcake round one, and a few grueling series, it will be a tall task, but a possible one. James averaged 27-8-8 last season, on par with his career norm. He played 55 games, but had no urgency to come back with how the Lakers season was going. There are solid odds on the Lakers to win, despite being ranked second in the table. They are behind the Clippers, which is going to be a fun battle. If they can work out their kinks with the roster, and even possibly make a move midyear, the Lakers will be in the thick of it come the spring. If the Lakers come out running hot, odds will surely creep away from this value. It could swing the other way if they struggle out of the gates. In a heated western conference, odds will be moving. Injuries also can shift odds greatly. At the moment, the Lakers odds are definitely worth putting money.