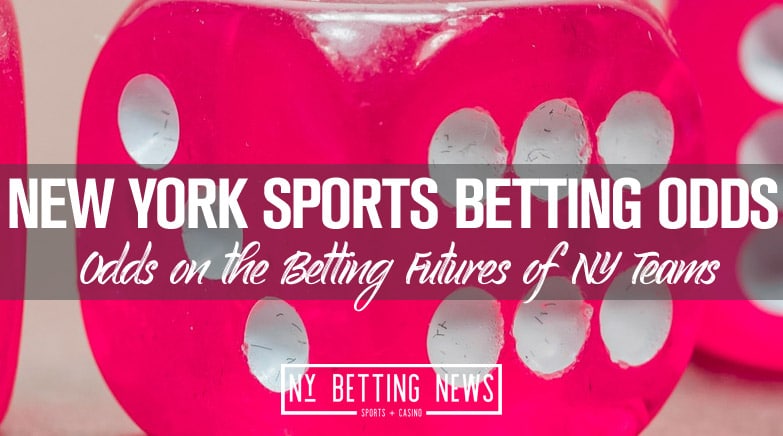 FanDuel Sportsbook and DraftKings Sportsbook have their future odds in place for a number of sporting events. Teams in New York feature some of the best, and worst, odds and value across their respective leagues. Some New York teams, such as the Yankees, not only provide excellent value but also have great chances of winning a championship. Other teams, like the Jets, may have made some big off-season moves to better their team, but are still ways away from competing for a title.

The New York Jets have their win prediction set at around seven games. FanDuel has their win total set at 7 while DraftKings is set at 7.5. The addition of Le’Veon Bell may have many Jets’ fans excited, but one player (who sat out the entire previous season) can’t cover up all of the holes this team has. Based on their schedule, the Jets should only win about five or six games, so the UNDER is the best bet. None of their champion odds should be taken seriously.

The New York Giants are in an even worse situation than the Jets. While the Jets at least added a big named running back to their roster, they also have Sam Darnold looking like their franchise quarterback. The Giants are still stuck in the mud with Eli Manning at quarterback and sent their best player, Odell Beckham Jr., to the Cleveland Browns. Once Manning begins the season on a losing streak (most likely starting the season 1-5), Giants fans will be calling for Daniel Jones to replace him. The odds of Jones winning more than five of the teams last 10 games is unlikely. UNDER six wins is the best bet on FanDuel. As with the Jets, any championship bets on the Giants are a waste of money.

Not only did the Knicks miss out on Zion Williamson when they didn’t land the first overall pick in the draft, but they missed out in free agency as well. Many thought that Kevin Durant and possibly other big-name players like Kyrie Irving would be headed to New York. Well, they did, except not to the Knicks. Based on the team’s current roster, the UNDER on their win total is a great bet.

The Brooklyn Nets won the Kevin Durant sweepstakes and added in Kyrie Irving as well. Basically stealing the two players that were expected to go to cross-town rival New York Knicks. Don’t expect to see Durant playing at all this season (although miracles happen), but this team will still be improved this season. Brooklyn won 42 games last season and their win total is around 47 games for both FanDuel and DraftKings. Look for the Nets to get 50 wins this season and hit the OVER on both books. There is also solid value in betting the Nets to win the Atlantic Division, but without Durant, that will be about as far as they will go this season.

The Yankees are the best team in New York right now across all sports. They have the best odds of winning a title this season and seem to be on pace to do just that. Despite all of their injuries this season, the Yankees are one of the best, if not the best, team in the Majors. Despite the low payout, you can bank on the Yankees winning the A.L. East. They are also a great team to take to win the A.L. as well as the World Series.

Mets fans once again are suffering a losing season despite their pre-season aspirations being so high. They brought in plenty of big-name players this offseason, but injuries and subpar play have led them to a sub .500 season pace. You can get one hell of a payout on the Mets winning the World Series, or even their division. However, you can chalk the bet up as a loss as soon as you place it. The team’s bullpen will end any hopes that the offense can generate. Time for the Mets to tear down and rebuild around their young core of Michael Conforto, Jeff McNeil, and Pete Alonso (as well as Jacob deGrom and Noah Syndergaard on the mound).

FanDuel Sportsbook and DraftKings Sportsbook have their future odds in place for a number of sporting events. California is home to more professional sports team than any other state (16). Some California teams, such as the Golden State Warriors and Los Angeles Dodgers, are used to making championship appearances. Others, like the Sacramento Kings and San Diego Padres, haven’t enjoyed that kind of success. However, they appear to be making the right moves in order to reach that goal.

Currently, FanDuel Sportsbook has the Los Angeles Dodgers as the second-best odds to win the World Series (+250) trailing only the Houston Astros (+220). DraftKings has the same order but has the Dodgers at +260. Right now, this looks like a great bet. The Dodgers have made it to the last two World Series (although they lost both). They are in a great position to make a third-straight trip to The Fall Clasic. Heading into the final week of the MLB season, the Dodgers are fourth in runs, first in runs allowed, first in hits allowed, first in ERA, second in BAA and first in WHIP. Aside from FLD% and SB, the Dodgers are in the top ten in every other major offensive and defensive category. Arguably the most complete team in baseball, the Dodgers have a great shot at winning the World Series this year with only one or two teams realistically standing in their way.

With six games left, the Oakland Athletics look poised to be heading back to the playoffs, albeit in a Wild Card spot. Assuming they do manage to hold on to their Wild Card lead, they will end up playing the Cleveland Indians or Tampa Bay Rays in the first round. This is a very underrated A’s team that could certainly make some noise come playoff time. Oakland is sixth in the league in both runs scored and runs allowed per game. At +1800 on DraftKings and +2000 on FanDuel, Oakland’s World Series odds are one of those bets that are worth a stab. Getting 20/1 on your money on a team that has the all-around talent to pull off a World Series upset isn’t the worst bet in the world.

Off to a 3-0 start, the L.A. Rams quest to return to the Super Bowl is off to a good start. Despite this perfect record, things aren’t all smiles in L.A. Quarterback Jared Goff already has five turnovers and the offense as a whole hasn’t been that great (16th in total yards). The health of Todd Gurley is also in question and he is averaging just 16 touches per game (averaged over 22 last season). The first half of their schedule is favorable but this team will need to improve if they want to compete with the NFC elite. They currently sit as the third-best odds on both FanDuel (+850) and DraftKings (+800). Those are solid payouts but there are better options out there with even better payouts at this time (Cowboys+1300 and Packers +1200(DK)/+1400(FD)). Until we find out that Gurley is 100% and that Goff has improved, hold off on the Rams Super Bowl bets.

Another undefeated team, the San Francisco 49ers, head into their Week 4 bye with a 3-0 record. They haven’t played the most difficult schedule (opponents combines 1-8) but it is still a little surprising that they are 3-0. Turnovers have been an issue for this team (8) but they still find a way to win games. They are fourth in yards per game and second in total yards allowed. The defense has looked really good, especially considering the situations their offense has put them in at times. If the 49ers can clean up their mistakes they have the potential to be one of the biggest surprises in the league this season. Until they play a playoff-caliber team I wouldn’t get overhyped on this team. FanDuel currently has its Super Bowl odds at +2800. Maybe worth a small flyer bet but nothing serious.

The NBA season is less than a month away and the Golden State Warriors enter the season with the seventh-best odds (+1400) at both FanDuel and DraftKings. This is the lowest they have entered the season since their dynasty began back in 2015. The departure of Kevin Durant is a bit of a blow to this team but you have to remember they won a title before he arrived in Golden State. The core is still there for this team with Steph Curry, Klay Thompson and Draymond Green. Golden State should do just fine without Thompson for most of the season (ACL injury) but he should be back in time for the playoffs when they will need him most. The additions of Willie Cauley-Stein and D’Angelo Russell are huge. The talent is certainly there and they have championship experience. At 14/1 odds, taking the Warriors to win it all is one of the best NBA bets you can make heading into this season.

Not only are the Clippers entering the season as the expected number one team in L.A. or even California, but the entire league. The Clippers are the favorites for both FanDuel (+330) and DraftKings (+325). Landing Kawhi Leonard and Paul George to play alongside Patrick Beverley instantly made the Clippers a favorite heading into the 2019 season. While they will no doubt be a good team and probably contend for a top seed in the West, I wouldn’t go all-in on the Clippers just yet. Unless they blow out the competition all season long, there is a good chance the odds on the Clippers see better days. Wait to see if the pre-season hype is for real before banking on it.

The other Los Angeles team, the Lakers, are expected to have a big season this year as well. They land behind the Clippers with the second-best odds to win it all this season according to both FanDuel (+440) and DraftKings (+425). The Lakers brought in Danny Green, Anthony Davis and Dwight Howard to team up with LeBron James and Rajon Rondo. Rondo and Howard are past their prime but they both still offer specifics to the game that pair well with the expected high-scoring duo of Davis and James. They also have three solid bench options in Kyle Kuzma, JaVale McGee and Kentavious Caldwell-Pope. This team looks built for the playoffs and should have no trouble being one of the best in the West this season. Like the Clippers, I would still like to see how this team plays together before jumping on the bandwagon. Although, any team with James on the roster is a good bet to win a title.

Of the three NHL teams in California (Anaheim, Los Angeles and San Jose), the Sharks enter the 2019 season with the best odds to capture the Stanley Cup this season. FanDuel has the Sharks tied with the seventh-best odds at +1800 while DraftKings has them as 11th-best at +1900. The Sharks lost captain Joe Pavelski to free agency (Dallas Stars) and although Joe Thornton is returning for another season, he is now 40-years old. There is plenty of talent on this team with Timo Meier, Erik Karlsson and Logan Couture. However, I think there are a few other teams that provide good odds and are more likely to win the Stanley Cup this season (Boston +1000(FD)/+1300(DK), Colorado +1800(FD)/+1700(DK) and Calgary +2000(FD)/+1800(DK).