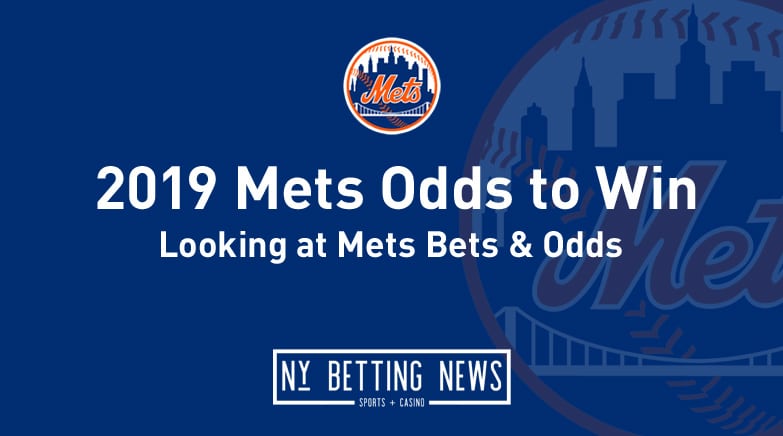 
The NL East was stacked this year outside of the Marlins, and it was expected to be a four-team race. The Atlanta Braves are pulling away, leaving the Nationals, Phillies, and Mets fighting for wild card scraps. Odds are already showing for the Mets, and it does not look good. Especially compared to their crosstown rival, the New York Yankees. If you are looking for a second have surge from the Mets, you can take a look at the odds below to take a gamble on. At the moment they are long shots to win even the division, and advancing just gets even tougher. Sitting ten games below .500 at the moment, it will be a hard task to even make the postseason. Make sure to catch up on all the latest New York odds and news here.

It was an eventful offseason for the Mets, who decided to go all in without truly going all in with cash. They took on the salary of Robinson Cano from the Seattle Mariners, also trading for Edwin Diaz. Both were going to fill holes that they lacked in prior seasons. They also signed Jed Lowrie and Wilson Ramos. At the break, only a few have really proven their worth. Wilson Ramos has lacked power, but has a respectable .349 OBP behind the dish. At 31 yeas old, it is hard to get a lot of value for a catcher anyway. Cano has been a major disappointment, hitting .240 but also owning a slugging percentage below .400. Lowrie has yet to play a game this season, as he was rehabbing from a knee injury he strained his hamstring. Diaz has been a bit unlucky with over a five ERA and 2.81 xFIP.
Taking on aging stars is a big risk, especially when you have little to mesh them with. The Cano trade is looking to go against the Mets, and you have to say the Lowrie and Ramos signings have been question marks. Ten games below .500 at the break, it is hard to see these guys turning things around in a loaded National League.

What Happened To The Pitching Staff?

The Mets have had a loaded rotation over the last few years, but this season it has been underwhelming. Both Zack Wheeler and Noah Syndergaard have over a 4.50 ERA, and ERA estimators are not backing it up with bad luck either. We knew we were not going to see  Jacob deGrom 2018’s numbers, but his 3.27 ERA hasn’t been backed by offense as usual. Syndergaard has been on and off the IL, and just hasn’t looked himself. There have been rumors of the Mets trading Wheeler to the Yankees or Red Sox. If this is the case, you can look at them as sellers before the deadline. This leaves little to be desired when betting them to make a playoff push.
Jason Vargas and Steven Matz have been decent backend rotation guys, but Matz’s numbers on the road have been horrendous. Vargas has been lucky pitching a full run lower than his ERA estimators. New York has also made it clear Vargas is available, but that wouldn’t make a huge impact on the rest of their season’s outlook. Overall the Mets rotation ranks 15th in ERA, which simply isn’t good enough for this group of arms. The Mets also rank 28th in bullpen ERA.

Is There Any Chance Of Making The Postseason?

Anything can happen if a team makes the postseason, which should be the goal for most teams. We can see what the Mets do at the deadline, as they will likely try and build around a younger core instead of going with the aging roster route. Wheeler is a name that is going to be linked to clubs, which indicates their desire to win in 2019. They sit over five games back out of the wild card, and are over ten games back in the division. This is a tough hill to climb, especially facing tough divisional opponents the rest of the way. With no odds differing between the three future bets, there really is no middle ground. You are better off waiting for next year.