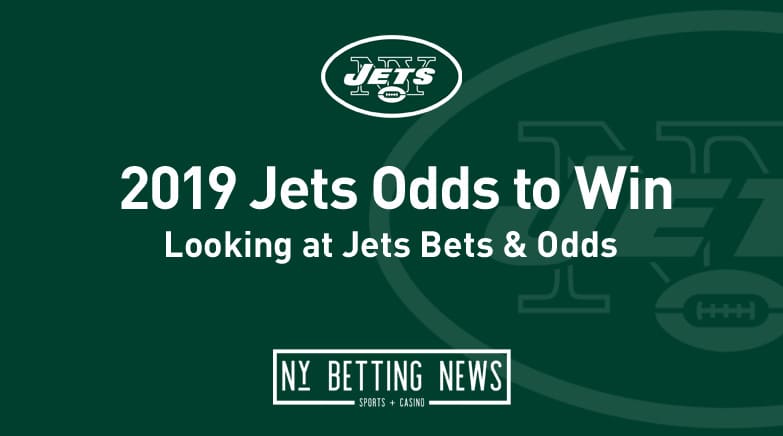 
Sports betting is legal in New York and we’re looking at the JETS, JETS, JETS! Both of the New York teams are rebuilding, and both finished dead last in the standings. Today we look at the New York Jets and their odds for the upcoming season. It has been a fun offseason for the Jets, spending on Le’Veon Bell and C.J. Mosley. They also had a strong draft, adding to the defensive side. The Jets had the third overall pick getting Quinnen Williams, and also got a upside pass rusher in Jachai Polite. Will this be enough to be the lone team in the playoffs out of the Big Apple? They certainly have better odds than the Giants heading into the season.  Let’s also not forget to mention their new uniforms are pretty sweet.

A four win season in 2018 was not what New York wanted, but it landed them a top five pick and they used it well. This is already coming off a draft where they have their potential franchise quarterback in Sam Darnold. When looking at the rest of the division, you could certainly argue the Jets finishing second behind the New England Patriots. It would likely take a major injury for New England to be up-ended as the AFC East champions year after year. The Jets made plenty of offseason signings, and their defense has a real chance to make a big improvement between the addition of C.J. Mosley and the young talent they have around them.
Le’Veon Bell hasn’t played a down since 2017, and comes into this season at 27 years old. He finally got the contract he wanted, and will now have to prove his worth. The Jets have not had a lead back like Bell for quite some time. New York was smart in adding some depth behind him with Ty Montgomery. Overall it is a better core on the offensive side, but year one will be about putting it all together. The receiving core of Robby Anderson, Quincy Enunwa, and Jamison Crowder all bring differing strengths that make this group versatile. They also have looked to hit on a young tight end in Chris Herndon, who emerged as a big time threat late last year.

I have mentioned a few signings and draft picks and will make impacts in year one. However, they have Jamal Adams and Leonard Williams already on the roster. There are seemingly locked in defenses already going to be in the top half of the league, but the Jets have a core that could really make an impact. With what should be an improved offense, the defense should be able to not be logged down by time of possession. The Jets have a relatively easy schedule, and will play Buffalo and Miami each twice. This gives the defense four games where they can standout. New York will also play the NFC East, Oakland, and the AFC North. There are some tossup games within that group. It is not a stretch to say this group of guys can be a strong defense and steal some games just by themselves.

Are The Odds Worth It?

Looking at the schedule, there are about 8-9 winnable games for the Jets. This is going to put them right in the range of being a wild card team. The problem is the AFC is deep, and they would need some teams to take a step back. Looking at 2018, the Colts were the last playoff team, and had ten wins. 9-10 wins will get you in the mix, and the Jets would have to have a very strong season to get to that mark. The odds to make the playoffs are more realistic and also enticing. Taking down the division would take New England having something major happen where they slip out of the first spot for the first time in ages.
The elite teams of the AFC are a tough matchup for the Jets, as they would likely face a New England, Kansas City, or Los Angeles. I believe the realistic odds are set for them making the postseason, and anything else would be a magical run. There is certainly value within these odds, and the Jets are worth the risk.