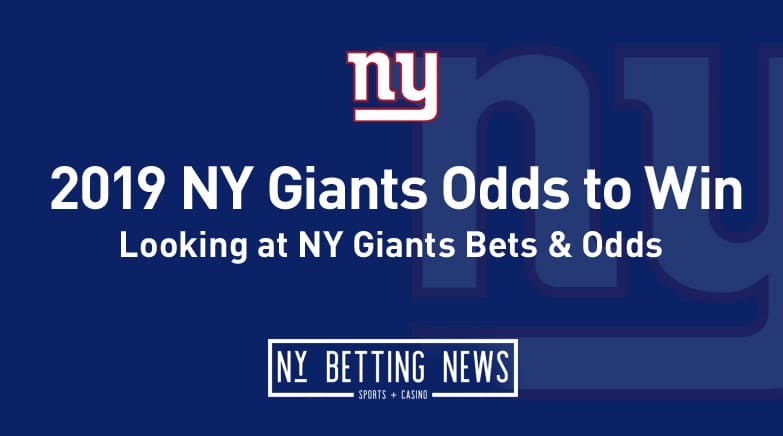 
The New York Giants come into the 2019 season with long shot odds to win the Super Bowl. While those odds can be chalked up to a loaded NFC, the Giants also have a lot of question marks. Eli Manning continues to retain the starting quarterback position, at least for now. Daniel Jones was the main picked top ten in the draft to prepare the position for the future. Looking into futures odds, the Giants are +1000 to even win the division. Those odds are tied with the Washington Redskins for the worst within the NFC East. With those odds set, I’m sure you could ballpark the odds to win the Super Bowl.

The Giants are coming off of a 5-11 season where they finished dead last in the division. They were one of the worst teams in the NFC, and a lot of it fell on the quarterback play of Eli Manning. While he is a two-time Super Bowl champion, the Giants continue to be delusional sticking with Manning. His arm seemed to be toast, ranking bottom ten in average depth of target last season. If you watched the Giants, Manning struggled to get the ball to wide receivers down field. Combining this with the departure of Odell Beckham Jr, who was traded to the Browns in the offseason, the Giants passing game is going to continue to be bottom half.
Saquon Barkley lived up to the hype in 2018, and will take on a heavy workload again in 2019. There is a concern with Barkley just seeing loaded boxes in comparison to last season. With little respect for the passing game, we could potentially see Barkley seeing 8+ man boxes more in 2019. The weapons around Barkley and Manning are decent, but they will certainly miss OBJ. Golden Tate fits well into what the Giants passing attack has done. Tate isn’t a deep threat route runner, and thrives in yards after the catch. They will hope this pairs with Manning who seemingly can’t throw more than 20 yards down field.

OBJ is coming off a 77-1052-6 line in 2018, and were limited by injuries and bad quarterback play. There seemed to be a motive to push OBJ out of New York. This was a massive offseason trade, and the Giants are now in a cloud of trading a top five wide receiver in the league when healthy. However, we can analyze the New York return on the trade. In return the Giants received the No. 17 overall pick, No. 95 pick, and Jabrill Peppers. The first pick turned into Dexter Lawrence, and the 95th pick went to Oshane Ximines. Are they immediate difference makers in year one? Probably not. While we can let this trade play out, the Giants at the moment are coming off as the losers in the deal.

A Focus On Defense

Outside of the Daniel Jones pick, the Giants took seven defensive players out of ten draft picks. They missed out on a major edge rusher, and that 6th pick would have been nice to use on one. They did draft Ximines in the third round, who has some potential. The secondary has some potential improvement. They drafted Deandre Baker with the 30th pick and took Julian Love in the 4th round. Both were great values. The Giants allowed 25.8 points per game, and they will need to improve this number to start the rebuild process to get back on top. Names like Antoine Bethea and Markus Golden coming over from the Cardinals have some big red flags with injuries. This is a temporary signing to fill a need before revisiting down the line.

Can The Giants Be A Surprise?

Short answer is, no. However, the Giants could improve on five wins from last season. The Giants have an O/U of six wins set by FanDuel Sportsbook. In terms of opponent’s winning percentage, the Giants have an easy schedule. Opponents in 2018 had a .473 winning percentage, which was tied for 27th. When you break down the division, the Dallas Cowboys and Philadelphia Eagles are in better spots to win the division and move on. You also have to think the NFC is just loaded with talent as well. Last year’s NFC wild card teams won nine and ten games.
To think the Giants are going to have a 4-5 win increase is a bit farfetched. There are better teams to take chances on if you are looking for a bigger payout. Within the next few years, the Giants should be on the rise if they can get the quarterback position situated. This is a rebuild project, and it is hard to see a rebuilding team in this state finish in the top six in the NFC.