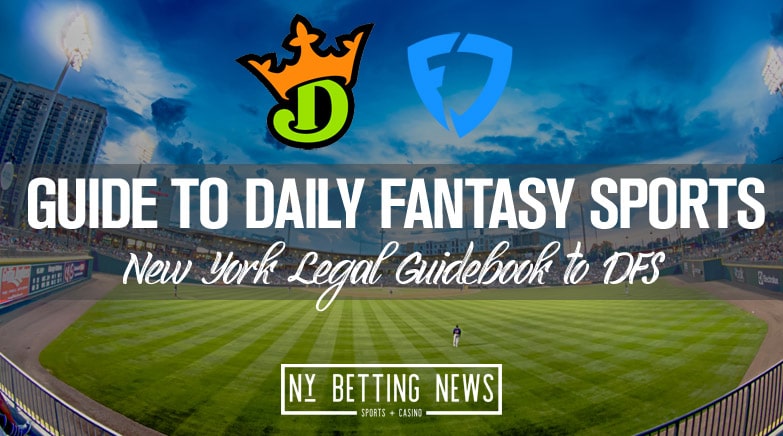 Daily fantasy sports, also known as DFS, has seen some tough times in New York over the years. Currently, DFS is legal in New York. There have been some recent controversies surrounding DFS in New York and there is still a chance the legality of it could change. DFS in New York is one of the biggest markets in the country as well. So if something were to happen in New York to make it illegal, companies like DraftKings and FanDuel would take a big hit.

History of DFS in New York

DFS officially became legal in the state of New York on August 3, 2016, when Governor Andrew Cuomo signed a bill into law. However, the road to legalization wasn’t an easy one and major DFS operators had to fight to get into the Empire State.
It all started when then New York Attorney General Eric Schneiderman issued a cease-and-desist order to both DraftKings and FanDuel in November of 2015. Schneiderman said that DFS was considered an illegal form of gambling according to state law.
The two DFS giants responded with a lawsuit claiming that DFS was a game of skill, not illegal gambling. In December of 2015, a court granted a temporary injunction that prevented the two from operating in New York. A month later at the start of 2016, they were granted a stay which allowed them to operate in New York until the lawsuit was settled.
FanDuel and DraftKings agreed to stop offering paid contests in New York and obey the results of the upcoming appeals court hearing. However, the New York legislature passed laws that regulated and taxed DFS before the case made it to the appeals court. As a result, all cease-and-desist orders were lifted and DFS sites were allowed to operate legally in New York.

Under the laws that regulate and tax DFS in New York:
– The New York State Gaming Commission acts as the regulatory body.
– Minimum playing age of 18.
– Prohibits collegiate events.
– DFS is exempt from the New York penal code that deals with gambling.
– Operators pay 15 percent tax on gross revenue.

Popularity of DFS in New York

FanDuel and DrafKings are the top dogs when it comes to DFS and that is no different in New York. It is estimated that the two giants account for more than 90 percent of all DFS activity across the country. However, there are plenty of other options in New York for DFS players. Aside from FanDuel and DraftKings, the New York State Gaming Commission has listed the following companies as permitted to operate fantasy sports in the state:
– Boom Fantasy
– DataForce, LLC
– Draft
– DraftDay
– Fanamana, Inc.
– Fantasy Draft
– For Players By Players
– Fulltime Fantasy Sports, LLC
– MastersFantasyLeagues.com
– RealTime Fantasy Sports
– Sports Hub Technologies
– Synkt Games, Inc.
– Vauntek, Inc.
– Yahoo

The Future of DFS in New York

After DFS became legal in New York, everything was smooth sailing, for about two years. Then in October of 2018, a New York judge put all DFS operators and players into a bit of a panic mode. New York Acting Supreme Court Justice Gerald W. Connolly declared DFS contests to be gambling, not games of skill.
Why did Connolly even make this ruling out of the blue? Well, that would be thanks to an anti-gambling coalition hiring an attorney to help fight the new DFS law. They argued that legalizing DFS requires a constitutional amendment (much like Governor Cuomo’s beliefs for mobile sports betting).
Since the October 2018 issue regarding DFS in New York, not much has happened publicly. The case still remains under appeal and nothing of significance has pointed in the direction of either side. Letitia James is the current New York Attorney General and the future of DFS could potentially rest in her hands. DFS players in New York should continue to feel safe playing their daily fantasy contests for the time being. Only time will tell if anything major will become of this issue. If something does come up that makes DFS illegal in New York, you can be sure that FanDuel and DraftKings will be ready to fight back once again.